Matthew Hamill created this final mask. The theme of the mask was, as we said before, duality. There is a vertical split down the middle of the mask, and there are also two ways of looking at the last. You can read the face as if the eyes and mouth are positioned in the same place as an actual human, or you can read the face from the “eyes” that are positioned near the nostrils and now the mask looks quite frightening. 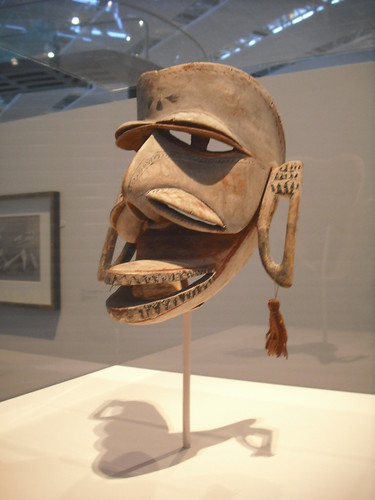 We decided to create a mask, based on the Melanesian ceremonial masks, that represented the native’s interpretation of Witt’s stories about the war between the Americans and the Japanese, specifically how he would have portrayed the Japanese army in his words.

These are some clay masks that myself, Matthew Hamill and Natasha Walsh made based on some of the aesthetics we had seen in some of the Melanesian masks. After reviewing these six heads we decided that we should include one of the themes of the film – duality – in the mask, so when Matthew took charge of the final product he took that into consideration.

The film begins with Private Witt living with a village of Melanesian natives.

We learn that Witt is AWOL from the army and has been with the natives for a few weeks at least. We thought it would be an interesting idea to base our artefact on something related to the time Witt has spent living with these people.

Melanesian culture, the beliefs and practices of the indigenous peoples of the ethnogeographic group of Pacific Islands known as Melanesia. From northwest to southeast, the islands form an arc that begins with New Guinea (the western half of which is called Papua and is part of Indonesia, and the eastern half of which comprises the independent country of Papua New Guinea) and continues through the Solomon Islands, Vanuatu (formerly New Hebrides), New Caledonia, Fiji, and numerous smaller islands. The Andesite Line, a geological feature of extreme volcanic and earthquake activity, separates Melanesia from Polynesia in the east and from Micronesia in the north, along the Equator; in the south, Melanesia is bounded by the Tropic of Capricorn and Australia. Melanesia’s name was derived from the Greek melas ‘black’ and nesoi ‘islands’ because of the dark skin of its inhabitants. In the early 21st century the population of Melanesia was approximately 10 million.

Though our quote-unquote schematic really could have doubled as an artefact, we did not know that at the time, so this is the planning stage of the intentional artefact.

We began by trying to spot any iconic or repetitive imagery throughout the movie. We narrowed it down to

There was one scene in particular that stood out was a shot of a dying baby bird that had fallen out of its nest in the middle of a big battle.

“One man looks at a dying bird and thinks there’s nothing but unanswered pain. That death’s got the final word, it’s laughing at him. Another man sees that same bird, feels the glory, feels something smiling through it.” – Private Edward P. Train

Since duality and man vs nature seemed to be prominent themes in the film we thought the image of the baby bird dying in the midst of the battlefield should be featured in the artefact.

Our first idea was to have a sculpture of the baby bird lying inside a discarded soldier’s helmet surrounded by the long green grass. This idea was promptly set aside as we decided that our idea was playing it a bit too safe.

As you can see, the map is very clearly divided into land and sea, the sea being the lighter gold and the land dark brown.

The red line that represents the soldier’s route and the passage of time also travels anticlockwise around the page, starting in the lighter sea and ending on the beach separating the light and the dark.

This similarity to the layout of another story template was completely intentional:

We went with a kind-of Indiana Jones style with the map, tea and coffee staining the page to differentiate between the sea (lighter) and the land (darker). We zoomed in our frame to fit only the area where the soldiers trekked. The quote-unquote thin red line represents the route, as well as the passage of time. The line starts at the top right and travels anticlockwise. The beginning of the line would represents 0:00:00 in the film, aka, the beginning; the part when the red line passes from the sea to the land is at roughly 0:28:31, when the soldiers storm the beach, and the end of the line is at 2:49:00, when the movie ends. ( I did try to remain as faithful to the actual historical route as possible, but I made a few changes the likes of which I shall explain later.

As there were so many characters we had to create off-screen events for, we had to be resourceful with the space we had. We couldn’t write every single detail of these character’s lives on the timeline, so we thought of a different approach to the problem.

Each white slip of paper contains a number that represents the time in the movie when a certain character is onscreen. The numbers are coloured according to the character the represent, for instance, one of the characters I chose to focus on, Sergeant Keck, is represented with the colour red (I chose this because he’s the only character we chose who dies on-screen). To properly elaborate on each character we decided to have a separate folder for each individual to properly tell their story:

I decided to turn my character files into individual military folders. That way, we could reference the times the character appeared onscreen (tying it in with the map) and write a proper big story arc for the character and fill in the off-screen parts without the map getting cluttered. Files would have a hand-drawn sketch of the character on the front bordered with the colour that will represent them on the map (with the numbers).

The file would be neat, and the pages slightly battered, bloody even, if the character was killed on-screen. The events would be written somewhat like a diary, or private journal. Either way, the pages would give the reader insight into the character’s background and psyche.

This is what my character, Sergeant Keck’s character profile looks like:

As you can see it is lovely and bloody as this character does in fact, and I quote, blow his butt off in the film.

There is a full page dedicated to Keck’s backstory, and five pages dedicated to on and off screen events during the film. Keck’s file was used as a template for the other members of the team to create their character profiles.

Anna-Mation
Create a free website or blog at WordPress.com.